You Are Here:
Home
/
About Us
/
History

Iowa Falls State Bank origins stretch back to the Commercial Bank of Iowa Falls, which was organized in 1882. Two years later, the bank changed its name to First National Bank. Mr. E. O. Ellsworth was president of this bank for many years.

In 1918, the old bank building on the southwest corner of Washington Avenue and Stevens Street was torn down and a rather ornate two-story building, designed by the Lytle Company, was erected in its place.

The Neo-classical building constructed in 1918 with its Corinthian columns flanking the entrance and Ionian columns on the east (Stevens Street) side now serves as the anchor for the entire three-front institution. 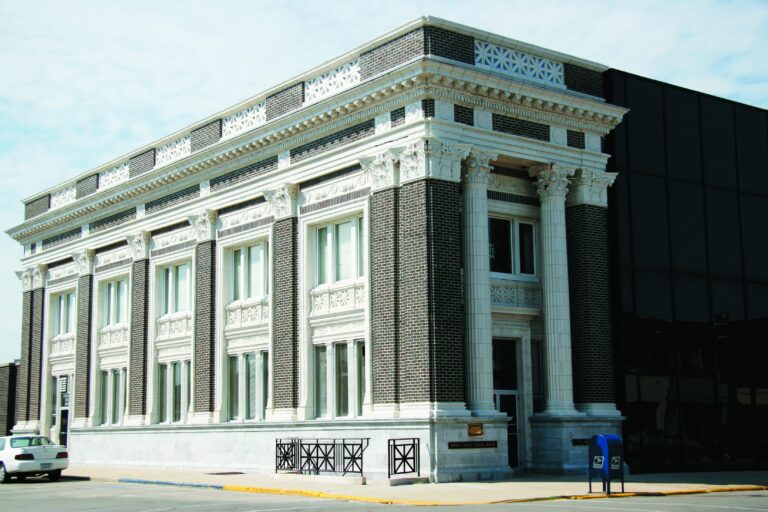 Along with all five banks in town, First National Bank was unable to withstand the Great Depression and closed its doors on December 2, 1932.  On May 25, 1933, with capital of $25,000 and a surplus of $5,000, Iowa Falls State Bank opened its doors for business.  Iowa Falls State Bank was the first bank to reopen in Iowa Falls.  On the first day the bank was opened, deposits of $25,000 were made, demonstrating a strongly felt need for a bank and the confidence of the public in the new bank.

For many years, Iowa Falls State Bank, occupied only a single 22-foot front on Washington Avenue.  Later in 1983 the bank expanded west 44 feet and remodeling the former Halton Furniture-Harrison Variety Store.  This expansion currently houses many offices and board room.

The bank purchased the Sam Gohring garage building south of the bank and tore it down in 1960.  This made room to construct the first Motor Bank; it is tunneled to connect to the main bank under the alley south of the bank.  The current motor bank was built in the same location in 2000.  This replacement added 2 more lanes and a walk up, while keeping the connected tunnel.  Still to this day, it provides safe transportation of money and employees.

Our neo-classical design of the Corinthian columns flanking the entrance and Ionian columns on the east (Stevens Street side) of the building is very detailed and picturesque, and with anything, requires specialized care and correction from weather and wear.  In 2007 Renaissance Restoration, Inc was hired to repair and preserve the masonry and detail of the bank.  They cleaned, repaired, molded, repointed and restored the condition of the bank back to the original prints, the project took about seven months.

As the outside project continued, more interest grew for the possibilities that could take place on the upper story and main level restoration projects.  As the historical fever kicked in, the Barlow Family contracted Interior Project Architecture out of Minneapolis for design and Gehrls Construction for the general contracting.  The major goal for the interior architectural designer and general contractor was to keep as much of the historical décor as possible and still produce functional, modern work site with historical ambiance.  Every effort was made to be historically correct, but, in any restoration, there are always obstacles and challenges.  Because of the age of the building nothing is level and nothing is square. Plans and visions were made and approved.

Construction started on the upstairs of the bank in 2010.  This remodel resulted in a beautiful upstairs training room, offices and board room.  There have been many services that were once offered upstairs, including an optometrist with grinding lenses, Abstract and Title company, chamber and a few lawyers have started their practice upstairs.  We are proud to house Don Barkers original desk upstairs that was given to the bank by the Barker family.

In 2013 the main lobby went through a major remodel, shifting the teller and receptionist desk to east wall.  Adding open desks in the middle of the lobby for customers to be served from.  Enclosing the copy center, rearranging bookkeeping department and removing a walk in vault.  Adding columns and lobby detail, new carpet, leveling the floor for new tile and new paint. To preserve the historical warmth of the lobby.

The Barlow family continues as owners of the bank with John Barlow, son of Bob and Jerene, elected as chairman and CEO.  Cinda Classon and Pam Angstman, daughters of Bob and Jerene, both serve on the board of directors, along with grandson Zach Barlow.